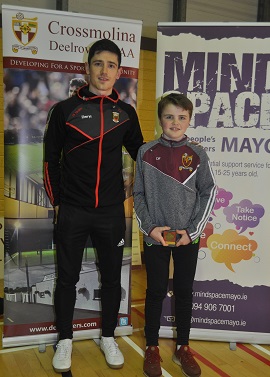 There was no winner of the Crossmolina Deel-Rovers GAA Club Lotto Jackpot on Saturday night 30th  of March 2019. The numbers were 5, 6, 26, 32, three punters matched three numbers, John & Teresa Moyles, Joe & Maura McHale and Pat & Des Lavin, and they each win €50. The draw took place in Maughans Bar. This week’s jackpot is €4,500. Many thanks for your continued support.

The next draw is on 6th of April in The Thatch Bar;

SafeTALK teaches participants to recognize and engage persons who might be having thoughts of suicide and to connect them with community resources trained in suicide intervention. SafeTALK stresses safety while challenging taboos that inhibit open talk about suicide. Training is FREE but booking is essential (LIMITED PLACES) Visithttps://bookwhen.com/srotraininggmr to book place!

This is an excellent opportunity for club managers, coaches, player welfare officers, parents and players to meet with and learn from concussion specialists in their region including UPMC Concussion Network Clinical Lead, Dr Sean Moffatt Mayo Senior Team Doctor and UPMC Concussion Network Lead Physiotherapists, John Courell & Liam Moffatt Mayo Sports Clinic , who will demonstrate a new model for the diagnosis and treatment of concussion.

UPMC Concussion Network clinicians will demonstrate how ImPACT neurocognitive baseline & post-injury testing has become part of their concussion management programme, along with the pathway in place to support clinicians, coaches and parents nationwide with access to testing, treatment and follow-up care for concussion.

This event is free of charge but places must be booked by clicking on the link below.

If you do have any further question on this please don’t hesitate to contact me at Ballina Medical Centre / Mayo Sports Clinic 096 22868 or alternatively emailing ConcussionIreland@upmc.edu

Crossmolina Minor team recovered from  a lighting start by Ardnaree with a goal from Peter Timlin and points from P.J.Gilmartin and Kyle Armstrong. Conor Caden grabbed a goal and Edward Gough and Adam Langan pointing before John Brennan scored the visitors second goal and P.J.Gilmartin pointed two frees Crossmolina finished the half the stronger with further goals from Conor Caden and Adam Langan to leave the half time score 3-3 to 2-5. Ardnaree grabbed the lead just after the break with points each from P.J.Gilmartin and Liam Jones two more goals from Killian Fergus and Edward Gough to give their side a five points lead Conor Caden Edward Gough Diarmuid Walsh Sean Hegarty Patrick McAndrew and Jonathan Murtagh  all adding points to which Liam Jones Brian Timlin P.J.Gilmartin and Peter Timlin replying  with a string of points to leave the final score Crossmolina 5-9 Ardnaree 2-11

Crossmolina minor team were comfortably defeated by Moy Davitts in this first round county Minor Division 3B on Sunday week in Foxford. The hosts were in control throughout final score 3 – 9 to 0 – 8

The annual Bord na nÓg Awards evening took place on Wednesday the 20th March 2019 at 7.30pm in the Crossmolina Deelrovers Sports Hall. Special guest on the night was our own Conor Loftus.

Thanks to all who sold and bought the GAA National Draw Tickets. All proceeds go directly into running the club and upgrading the facilities for all our members.

As plans progress for this Summer’s Nephin Festival the committee are looking for ideas for events that will cater for the senior members of the community as some of the regular events from past festivals will not be included this year. There are forms available in the Post Office and we ask that people take a form, fill it out with ideas on events they would like included this year and return to the Post Office before March 25th.

Girls “Plate” doubles winners were Roisin Tolan and Emily Loftus, and Emily and partner were mixed doubles runners up. Our Crossmolina Juniors did us proud at this day long event and we would also like to congratulate Ballina for their dedication and organisation of this annual event. Next date is the Ballina Singles event on the 23rd March so take note. Everyone please give your entries to us ASAP. Also Ballina Badminton Club are hosting their social Sunday on the 31st March at 4pm for all our adult members. So lots more badminton to look forward to ye