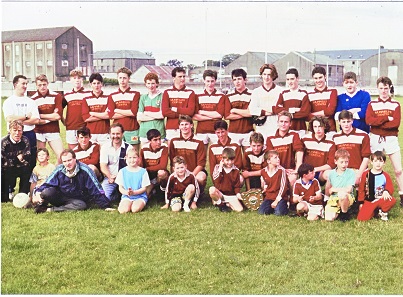 There was no winner of the Crossmolina Deel-Rovers GAA Club Lotto Jackpot on Saturday night 6th of April 2019. The numbers were 2, 9, 26, 32, one punter matched three numbers, Kathleen Jordan,  and wins €150. The draw took place in The Thatch Bar. This week’s jackpot is €4,650. Many thanks for your continued support.

The next draw is on 13th April ‘19 in Cawleys of Rakestreet;

This is an excellent opportunity for club managers, coaches, player welfare officers, parents and players to meet with and learn from concussion specialists in their region including UPMC Concussion Network Clinical Lead, Dr Sean Moffatt Mayo Senior Team Doctor and UPMC Concussion Network Lead Physiotherapists, John Courell & Liam Moffatt Mayo Sports Clinic , who will demonstrate a new model for the diagnosis and treatment of concussion.

UPMC Concussion Network clinicians will demonstrate how ImPACT neurocognitive baseline & post-injury testing has become part of their concussion management programme, along with the pathway in place to support clinicians, coaches and parents nationwide with access to testing, treatment and follow-up care for concussion.

This event is free of charge but places must be booked by clicking on the link below.

If you do have any further question on this please don’t hesitate to contact me at Ballina Medical Centre / Mayo Sports Clinic 096 22868 or alternatively emailing ConcussionIreland@upmc.edu

Kiltane scored a deserved six points win over Crossmolina in Bangor in the first round of the county Division 2 league. After a closely contested first half possession wise Crossmolina trailed by three points 0-6 to 0-3 having missed some great scoring chances and were to pay dearly after the break in the eight minuet Mickie Sweeney grabbed a goal and minutes later Adam Carabine netted from the penalty spot there after that visitors were playing catch up and Kiltane ran out comfortable winners

Crossmolina emerged four points winners in this county Minor League tie at Tiernans Park after a titanic struggle. In a game where there was only a score separating the sides until Conor Caden grabbed a goal in the 20th minute and repeated the dose eight minutes later when he converted a penalty after Niall Coggins was upended in the square to leave the half time score 2-6 to 0-6. The visitors kept the score board ticking over with four points from Kieran Cooney and one each from Padraig Breslin and Luke O’Shea in between Conor Caden and Edward Gough replied points each to leave just two points separating the sides in the 51st minute up popped Padraig Breslin with a stunning goal to give his side a one-point advantage. It was then the Deel-Siders really came to life kicking five points two long range frees from Edward Gough and one from open play and points each from Diarmuid Walsh Conor Caden sealed a hard earned two league points

Crossmolia U14 Team got their league campaign off to a winning start in the County U14 League with a win over Naomh Padraig Tiernans Park. Three first half goals from James Maheady Jack Naughton and Richie Shelly laid the foundation for three points win 3-5 to 1-8 Crossmolina team and scorers were

The annual Bord na nÓg Awards evening took place on Wednesday the 20th March 2019 at 7.30pm in the Crossmolina Deelrovers Sports Hall. Special guest on the night was our own Conor Loftus.

Thanks to all who sold and bought the GAA National Draw Tickets. All proceeds go directly into running the club and upgrading the facilities for all our members.

As plans progress for this Summer’s Nephin Festival the committee are looking for ideas for events that will cater for the senior members of the community as some of the regular events from past festivals will not be included this year. There are forms available in the Post Office and we ask that people take a form, fill it out with ideas on events they would like included this year and return to the Post Office before March 25th.

Girls “Plate” doubles winners were Roisin Tolan and Emily Loftus, and Emily and partner were mixed doubles runners up. Our Crossmolina Juniors did us proud at this day long event and we would also like to congratulate Ballina for their dedication and organisation of this annual event. Next date is the Ballina Singles event on the 23rd March so take note. Everyone please give your entries to us ASAP. Also Ballina Badminton Club are hosting their social Sunday on the 31st March at 4pm for all our adult members. So lots more badminton to look forward to ye