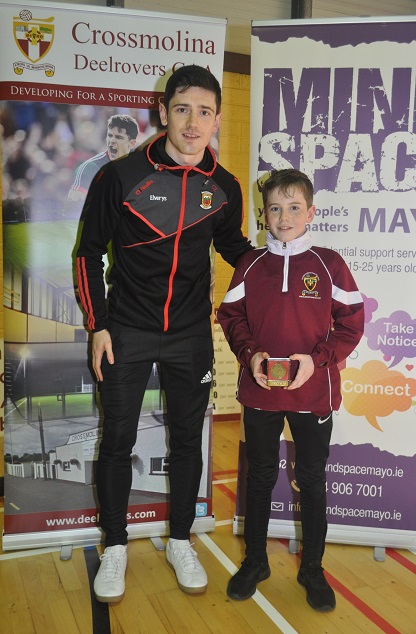 There was no winner of the Crossmolina Deel-Rovers GAA Club Lotto Jackpot on Saturday night 20th of April 2019. The numbers were 2, 6, 9, 28, four punters matched three numbers, Stephen Rochford, David McNamara, Annette Gray and Aiden Mulligan, and win €50 each. The draw took place in O’Malleys Bar & Grill. This week’s jackpot is €4,950. Many thanks for your continued support.

The next draw is on 27th April in Maughans Bar;

Any new/renewing members need to register before May 31st. No new registrations will be accepted for 2019 after this date. Please see www.deelrovers.com for further details

Crossmolina U16 team continued their good recent form with a comfortable win over Burrishoole in Newport on Tuesday last, but it was the home side who set the early pace with a Peter Doherty goal Alfie Maloney and Niall Coggins replied the goals for the Deel-Siders.  Eoin McNulty Niall McGreal pointed before Jack Walsh raised two green flags in the space of five minutes in the 20th and 25th minutes both sides flashed over points before the break to leave the half time score 3-8 to 2-4 in favour of the West Mayo boys. Crossmolina introduced a couple of subs at the break and for the next twenty minutes they dominated scoring three goals one from Luke Rowland and two from Diarmuid Walsh with a string of points from James Williams Brian Hopkins Luke Rowland Eoin Murphy and Diarmuid Walsh. Burrishoole came back with a late burst of scores from Niall McGreal James Keane and goal that was deflected into the net of a defender after Conor Reynolds had made a couple of fine saves.

This local derby was an exciting and well contested game throughout at Tiernans Park on Friday week the visitors lead at the break 2-4 to 1-3 and continued to hold the upper hand during the final thirty minutes to run out deserving winner by six points in the end.

At the Executive meeting of the Crossmolina Deel-Rovers G A A Club on Tuesday night 9th April. Votes of sympathy were expressed to the Families of our club members and their relations on their recent Bereavements. May they rest in peace.