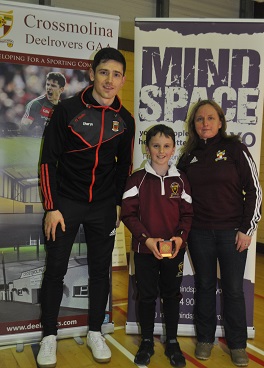 There was no winner of the Crossmolina Deel-Rovers GAA Club Lotto Jackpot on Saturday night 4th of May 2019. The numbers were 9, 19, 31, 35, two punters matched three numbers, Roisin Clancy and Grace Granahan, and win €75 each. The draw took place in Sticks Bar. This week’s jackpot is €5,250. Many thanks for your continued support.

The next draw is on 11th of May in Hineys Bar;

Any new/renewing members need to register before May 31st. No new registrations will be accepted for 2019 after this date. Please see www.deelrovers.com for further details

Crossmolina U16 team continued to rack up big scores with a 9 – 18 to 2 – 10 win over Mayo Gaels at Mayo Abbey on Tuesday last. Crossmolina team and scorers were

Crossmolina snatched a draw with Burrishool with a pointed free from top scorer Thomas McNulty in injury time at McGovern Park on Sunday week. Burrishoole had a greater share of the play but missed a lot of chances. Crossmolina lead at the break  1 – 7 to 0 – 8 the goal from Shane McKinley. Burrishoole kept the score board ticking over with points  and Crossmolina’s  Declan Gilroy grabbed another goal to keep them in the contest and their were rewarded with the  late equalizer for a share of the spoils after entertaining game

Breaffy edged out visitors Crossmolina in the county Junior B Championship on Sunday week in a high scoring well contested game played ideal weather conditions. The winners held the upper hand in the opening half leading at the break by 0-12 to 1-5 Dean Loftus scoring the Crossmolina goal. After the break Crossmolina came more into the game a goal from a penalty from David Howley and a another from sub Liam Donohoe in the 55th minute tied the score but Breaffy snatched a late point from a free to win by a point

Crossmolina grabbed two vital League points with four points win over visitors Moy Davitts in a game that was closely contested for 45 minutes Gerard Haran opened the scoring with a point For Crossmolina which was quickly cancelled out by Brian Heneghan and Conor Byrne for Moy Davitts. Fionan Duffy struck three points in a five minutes spell Christopher McGlynn replied with a pointed free and Brian Heneghan and Tom Cafferty exchanged points before the break to leave the half time score 0-5 to 0-4 in the Deel-Siders favour. J.P.Mulhern extended the lead with point in the thirty second minuets. A flowing Moy Davitts move resulted in Conor Byrne cutting in from the left hand side and rifling the ball to back of the net past a helpless Patrick Loftus Fionan Duffy drove over the equalizer minutes later Brian Heneghan grabbed two points in the 40 and 43 minutes in between Kevin Mulhern pointed a 45 Crossmolina held the visitors scoreless for the remainder of the half and tacked on five points from Fionan Duffy John Garrett and three from Fionan Duffy in the last ten minutes to secure a vital win.

Click on image below for GAA Club Newsletter for April 2019;

At the Executive meeting of the Crossmolina Deel-Rovers G A A Club on Tuesday night 9th April. Votes of sympathy were expressed to the Families of our club members and their relations on their recent Bereavements. May they rest in peace.