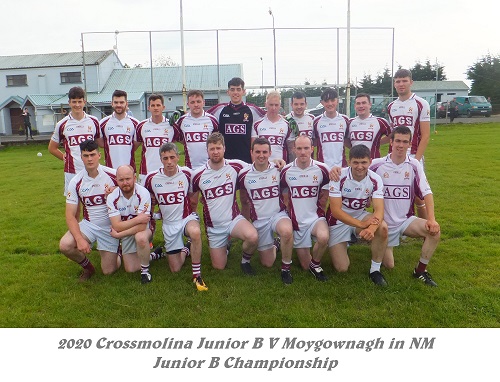 No jackpot winner, no match three.

Next week’s jackpot is €6,600, many thanks for all your support.

This County Minor B Semi-Final played in Park community pitch on Friday week was a cracking contest from start to finish Crossmolina got off to flying start with goal from Diarmuid Walsh  Ballyhanuis drew level after eight minuets with points from Simon McDonagh Aidan Sloyan and Daniel Murray. Diarmuid Coggins and Diarmuid Phillips exchanged points and Diarmuid Walsh restored the Deel-siders advantage just before the water break. Ballyhanuis  Aidan Sloyan and Daniel Murray quickly added pointed for the East Mayo Boys which were Cancelled out with like scores from Luke Rowland and Diarmuid Walsh before  Diarmuid Phillips scored  a goal for Ballyhanuis again Crossmolina came storming back with points from Luke Rowland two and Conal Carolan one Josh Webb who was provider in a numbers scores up to this was on hand to fire this side into a 2 – 6 to 1 – 7 lead at the Half time break with well taken goal Josh grabbed his second goal minuets into new half and Oisin Kelly added a point  Luke Rowland replied with first of his goals and  repeated his feat in 45th minuet in between Killian Fergus and Niall Coggins to give the Deel-siders a two points Advantage at the waters break 3 – 9 to 3 – 7 Niall Coggins got on the score sheet minuets after the break but that was as it got for Crossmoloina Simon McDoangh pointed and Josh Webb quickly tacked on 1 – 1 Clayton Nolan Diarmuid Phillips and Josh Webb rowed in with points all Crossmolina muster was two points from Niall Maughan and Killian Fergus to leave Ballyhanuis deserving winners after great contest

Mayo Lady’s Intermediate Semi-final  at Tiernans Park was a thrilling contest from start to finish with very little separating the sides. The hosts enjoyed  a 1 – 5 to 0 – 2 lead at the half time break with points from Aoife Deane Rachel Kearns Rebecca Maughan and a classic Goal from Sinead Walsh Chelcie Doherty fired over two points for Charlestown which Sinead Walsh cancelled out with like scores Both sides were guilty of some poor finishing the East Mayo girls shot nine wides to the North opponents six. Charlestown interduced  Deirdre Doherty an what a impression she made two points in the opening minuets of the third quarter Kelly Crean added another in between Rebecca Maughan tacked on 1 – 1 and Sinead Walsh raised another white flag just before the Water break Deirdre Doherty reduced the lead to five points with cracking goal and on the restart Charlestown Shauna Mahon grabbed her sides second goal to reduce the lead to two points Rebecca Maughan quickly replied with a point and Rachel Kearns struck a bullet of a shot from 30m to back of the net and it badly needed as the game entered the final ten minuets Hannah Morrisroe replied with a point. Despite Deirdre Doherty’s five points during this spell of dominance Sinead Walsh and Rebecca Maughan kept their side  with a two points advantage in those nail biting final minuets to secured a place in the Final. McHale/Rovers Team Niamh Larkin Clodagh Barrett Danielle Kelly Sinead Kearns Ruth Queenan  Shauna Maughan Grace Murray Eilis Keane Aoife Deane  0 – 1 Emily Murray  Rachel Kearns 1 – 1 Madeline Keane Rebbecca Maughan 1 - 3 Sinead Walsh 1 – 5  Caoimhe Walsh   Subs Lisa Lavelle for Madeline  Annie Gough for Sinead Kearns Avril Noone

Crossmolina advanced to the North Mayo Semi-final of the Winter League at Tiernans Park on Sunday week with a five points win over Belmullet. Crossmolina jumped into a 0 – 4 to 0 – 1 lead at the water break with two points from Dean Loftus and one each from Edward Gough and  Conor Rowland. Dillon Walker replied with a point.  Belmullet clawed their way back with points from Darragh Moran D Barrett and P Ruddy. Edward Gough and Dean Loftus replied with points each before Dillon Walker restored the lead for Erris men when weaved his way past a couple of would be tackles to drill the ball to the net J. P. Mulhern tied the score at the break with a point from a 45  0 – 7 to 1 – 4 Crossmolina dominated the third quarter with Dean Loftus scoring five points and Derek Hegarty one Oisin O’Donnell replied with two points for the visitors. Final quarter was evenly contested Dean Loftus grabbed two points and Niall Timoney came off the bench raise a white flag Oisin O’Donnell Pointed a free and A Walsh pointed late on the leave the final score 0 – 16 to 1 – 8 after entertaining game. Crossmolina Team David O’Boyle Barry Murphy Noel Hegarty Kenneth McHugh Stephen O’Malley Keelan Hegarty John Garrett Conor Rowland 0 – 1 J. P. Mulhern 0 – 1 Kevin Keane Lorcan Loftus Derek Hegarty 0 – 1 Edward Gough 0 – 2 Dean Loftus 0 – 10 Subs Liam Donohoe for Keelan Hegarty  Niall Timoney 0 – 1 for Edward Gough Declan Gilroy for Kenneth McHugh

16mins 2nd half @DeelroversGAA--> off: Keelan Hegarty   on Liam Donohue

27mins 2nd half @DeelroversGAA--> off: Kenneth McHugh on: Declan Gilroy

29mins 2nd half @DeelroversGAA--> off: Lorcan Loftus on: Ronan Lavelle

32mins 2nd half @DeelroversGAA--> off: John Garrett on: Ronan McDermott

Crossmolina suffered a heavy defeat in the North Mayo Junior B League final for the Michael Walsh memorial shield at Tiernans Park on Wednesday last against Knockmore. Playing with the aid of the breeze the visitors raced into a 2 – 10 to 0 – 2 lead at the interval and continued to dominate the remainder of the game apart from a brief  spell when Dean Loftus grabbed a goal and two points and Gerard Haran added on two points to leave the final score 3 – 16 to 1 – 6 in a very disappointing final

19mins 1st half  @DeelroversGAA--> off: Eoin McDonnell  on: Patrick McAndrew

20mins 1st half  @DeelroversGAA--> off: Colm Hegarty  on: JP Mulhern

26mins 1st half  @DeelroversGAA--> off: Conor Rowland  on: John Garrett

03mins 2nd half  @DeelroversGAA--> off: Fearghal Gill  on: Lorcan Loftus

Homeland North Mayo U16 A Championship

Ballina were in control throughout this Homeland North Mayo U16 A championship tie At  wet James Stephens Park on Tuesday last with goals from Daniel Feeney  Orla Canavan and Brian Heffernan. Richie Shelly finished to net after a goalmouth scramble James Maheady tacked on three points and Eoin Murphy added another before the break Again Daniel Feeney and Sean Neary continued to torment the Deel-Siders Defence with a brace of goals and points each. Crossmolina came well into game in the third quarter James Maheady kicked four points Kyle Gallagher and Aidan Granaghan one each Eoin Murphy rowed in with 1 – 2 to reduced the lead to seven points but that was as good as it got for the visitors Further Goals from Sean Neary Lewis Hackett put the game well and truly out of reach on evening when nothing went right for Crossmolina boys who played some good football with limited possession

Homeland U14 B All County Group 1

As we return to St Tiernans Park for training and games in the coming weeks, please be mindful of all Government and GAA guidance’s on personal protocols.

We have invested in signage and sanitisers but we will be depending on everyone taking personal responsibility.

If you have any concerns, there is a Covid supervisor appointed to each team, or you can ask any Club officer.

We wish all our members and supporters well during this unnerving time. Our facilities are closed in line with Government and GAA guidelines. We will update you in line with best advice. Feel free to contact any of the Club officers if you feel we can be of any help. We are liaising with local businesses to help with deliveries and would ask everyone to keep a close eye on those in our community that may need assistance at this time