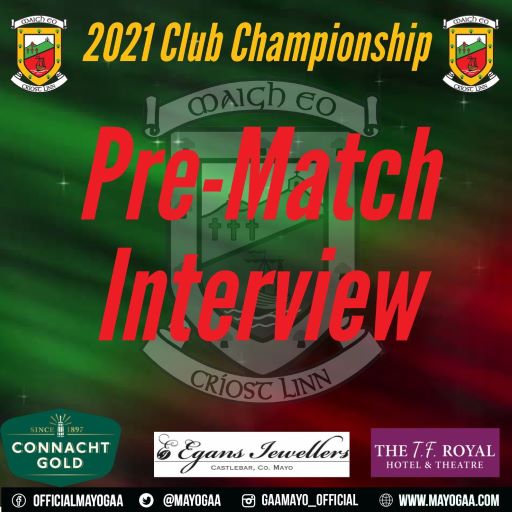 Garrymore’s rise through this year’s Mayo senior football championship has caught one or two people by surprise. The south Mayo men have put in three brilliant performances, none more so than when disposing of The Neale and Kiltane in their first two group games.

Those two victories put this young side through to the quarter-final and one of their selectors Martin Maloney insists the “one game at a time” approach was the mantra they have stuck to this year.

“Yeah we're very happy, so far so good. It's one game at a time. It’s literally been one game at a time. When the draw was made, we were happy to get a home draw for our first game against Kiltane. That was our main focus because we know how important it is to win your first game, to get a bit of momentum going into game two and game three. When you lose your first game - as we found out last year - you're on the backfoot and you know it's a must-win game to the end. So our main focus was to get the win in whatever way we could in that first game and reassess things after that and go again further.

“That's basically been our philosophy and mantra this year. One game at a time because with injuries and weather conditions, there's so many factors that can affect the result. So it's one game at a time and hopefully you can get the result on that given day,” Maloney told Mayo GAA TV.

Garrymore headed into their final group game, against one of the favourites for this year championship Breaffy, with both teams already through. Still, it was a massive opportunity for this side to test themselves against one of the standard setters of Mayo football in the last 10 years or so.

“It was all about keeping the momentum going. We set the team up the way that we thought would win the game and we're probably unlucky that it ended up in the draw, as we got ourselves into a winning position. But, we played quite well and we were really happy with our performance,” he said.

If Breaffy have been the standard setters over the last 10 years, Castlebar Mitchels have exceeded that standard, particularly when winning the three-in-a-row between 2015-2017. However, they haven’t reached a final since and have brought through a young squad this year in order to set themselves up for the future.

“We're looking forward to the Castlebar game. They've won several championships and gone on to represent Mayo in All-Ireland finals. So we know a lot about Castlebar. They've come through a culture of winning, they've seen the senior team perform to high levels throughout the year. So we're under no illusion the difficult challenge that is ahead. We're relishing the challenge. These are the games that we get involved in football for, you know, these knockout games, you know, it's a winner take all. You lose, you're out of the championship,” Maloney said.

Finally, Maloney spoke of the excitement of both the Garrymore players and management team in being involved in the knockout stages of the championship, particularly given the last 18 months.

“I was a player for a number of years and for the last couple of years I've been involved in the management side of things. I really enjoyed it this year. I know it's been a shorter season with Covid and everything. Every club was in the same position but we have games coming thick and fast and that's what players want you know. That's the feedback we get from our players.

“Actually I work in AIB in Claremorris and there’s people that come in from all the local clubs in South Mayo and that's the topic of conversation most of the day with my customers. There’s super excitement not just in our club but across the county. That’s why we all get involved in football,” Maloney said.

Hopefully for Maloney and Garrymore, their championship journey can continue beyond Sunday afternoon.

The new kids on the block have surprised a few people this term, with Belmullet topping Group 2 of this year’s Mayo SFC. While a draw with Charlestown Sarsfields in their opening fixture didn’t set the world alight, a shock win over last year’s champions Knockmore catapulted Belmullet into the spotlight.

Chairman of the club Pat Cowman is proud of his club for competing at the knockout stages of senior football, with this year’s aim always to progress to a quarter-final game where “anything can happen”.

Breaffy are massive favourites with the bookmakers heading into Sunday’s game, but this won’t stop this group of players believing they can continue on their impressive group-stage form. As a club, this is exactly where Belmullet see themselves competing now, and in the future.

“It's a testament to the Bord na nOg, and the underage structures there. I myself have had a number of these lads that are now in the panel. Myself and Brian Lynch have had them over the years - under-14s, under-16s and Minor. So it's great to see these guys coming through and be challenging for places on the starting team,” Cowman told Mayo GAA TV.

Covid restrictions have been hard on every GAA club throughout Mayo, let alone Ireland, over the last 18 months. However, Cowman was keen to point out the amount of work involved by people in Belmullet to keep everyone safe, which has allowed for the gradual return to championship football.

“It's great to see it, you know, the last few years have been tough, on any club with Covid restrictions. We took a fairly harsh stance when restrictions came in and once we were allowed to go back onto the pitches and stuff. It’s a testament to the work of Covid officers in the club, the players and management of every team from under-7s and under-8s, right up to the senior team. The work and commitment they put in has made sure training and matches have happened safely for the players,” he said.

As mentioned above, the highlight of Belmuttet’s championship to-date was their stunning win over Knockmore. Cowman was very proud of the club for hosting the fixture, let alone the players and management team for pulling off the sensational shock.

“We played Knockmore at home here and it was a great achievement for the club. For the players themselves, management and the club as a whole. You know, to beat them that day at home was a great day. To host a championship game requires a lot of work from the groundsmen. And to top it off with a win against the county champions. It was a bit special in fairness,” he continued.

This year, more than ever, fans have access to games that they ordinarily wouldn’t. With RTÉ showing Saturday’s two games, followed by Mayo GAA TV streaming Sunday’s two. The Belmullet chairman pointed out that not everyone can travel to watch the game live on a Sunday afternoon, so having the stream available to them has created that extra buzz around this year’s championship.

“Last year, we were lucky enough with Erris FM to stream some of our games live. Not everyone can travel to Ballina. So it's great to have the games on for people to view them live. That's exciting as well. Like it's exciting times for the club. We're delighted to be where we are,” Cowman added.

It would be a mighty shock for Belmullet to progress beyond Sunday. It’s still nothing that they haven’t pulled off before.

Breaffy have had some hard luck stories over recent Mayo senior championships. Losing two finals out of the last four, four of the last eight - no matter which way you look at it they’ve been very close. Under a new management team lead by Martin McIntrye, Breaffy are hoping to go one better in 2021.

Earlier this year, the Belmullet native replaced Peter Ford, who stepped down after last year’s final defeat to Knockmore. Ford oversaw the west Mayo club’s senior team for a number of years but fell short of landing the coveted Moclair Cup.

For McIntyre, who has plenty of inter-county coaching experience, he’s just delighted to have made it to the quarter-finals of this year’s championship.

“We're a new management team that came in this year and took over from Peter Ford who did great work over the years to set such a very high standard with Breaffy. It's up to us to come and maintain that as well as improve it. If we could, hopefully we get the performance on Sunday to reflect that,” McIntyre told Mayo GAA TV.

Breaffy’s championship group included The Neale, Kiltane and fellow qualifiers Garrymore and McIntyre spoke of his relief to get through the group and into knockout championship football.

“Yeah, I would say it's been a long year since February preparing for this so we're glad to be in the quarter-finals. We played the Neale in the first game and put in a good performance in our second game against Kiltane to put ourselves and Garrymore top of the group on four points. At this stage now, we've moved on and we’re looking forward to the game on Sunday,” he said.

Regarding Sunday’s opponents Belmullet, McIntrye is no stranger but there is no doubt he will be having split loyalties come throw-in on Sunday afternoon.

“Obviously I know them very well, being from Belmullet myself. I've lived down there and I have a lot of friends down there as well so I know a lot of the guys. I suppose as I mentioned earlier, we're two of eight teams in the quarter-finals now and we will be preparing our players for Sunday to get a performance,” McIntyre added.

In what has been a breathtaking group stage of the Mayo senior championship, McIntrye was asked what it was like to be involved when the standard is so high.

“Even in the county league games that we've played they have been of a really high standard. You can see the improvement across the board. I have to commend the players on the situation they found themselves in over the last 16 months. Even, given the time of the year, the games that we've seen or been involved in have a very high standard in terms of skills and skill execution, as well as being very entertaining,” McIntyre said.

Given the last 16/18 months, the Breaffy manager is delighted to be involved at the business end of championship football, and spoke highly of the coverage given by both Mayo GAA TV (who will be broadcasting two games Sunday) and RTÉ (who will be showing the other two games live on Saturday).

“You have to commend Mayo GAA TV and the wider media as well for their coverage of Gaelic games at present. And speaking to the wider public, I think they really appreciate that. Given the time of year, they haven't had much coverage to-date. And that seems to have really picked up this year. So people are already enthused by it and really looking forward to this round of quarter-finals and seeing who will progress to the semi-final and final stage as well.

“I think what has attracted the media coverage the most is the style of football. It's probably emerged in our senior county team that they go out and have a go and try and play football in the best possible, entertaining way and try to get results through that. So I think that's reflected throughout the club scene, games I have seen to-date and Mayo as well. So that bodes well for the future in terms of the players coming through,” McIntrye added.

No doubt we will see four incredible quarter-finals at the weekend, with Breaffy’s chances of finally lifting the Moclair Cup as good as any team’s this year.